In geometry processing, Tutte embedding, also known as barycentric embedding, can be used for mesh parameterization by fixing the boundary vertices of the mesh on a certain convex polygon, and building a crossing-free straight-line embedding with the interior vertices inside the convex boundary.

In order to implement a Tutte embedding, we have to use two vectors $\mathbf{u}$ and $\mathbf{v}$ to store the parameterized coordinates, and another two vectors $\bar{\mathbf{u}}$ and $\bar{\mathbf{v}}$ to store the boundary vertices. For the interior vertex $i$, we can directly apply the following equation to it to build the barycentric mapping:$$\begin{equation}\sum_{}a_{i,j}\begin{pmatrix}u_j\\v_j\end{pmatrix}-a_{i,i}\begin{pmatrix}u_i\\v_i\end{pmatrix}=0,\tag{1}\label{eq:1}\end{equation}$$where $j$ denotes the adjacent vertices of $i$.

I chose a disk as the convex shape for fixing the boundary vertices and used the geometry-processing-js library for the data structure of meshes.

The uniform Laplacian weight set is easiest to build, but it does not take the geometric feature of the mesh into consideration. We can simply set the entries of the weight matrix in the following manner:$$\begin{equation}\begin{cases}a_{i,j}=1,\\a_{i,i}=-\sum_{}a_{i,j}=-D_i,\end{cases}\tag{4}\label{eq:4}\end{equation}$$where $D_i$ is the degree of vertex $i$, i.e., the number of edges connecting $i$. 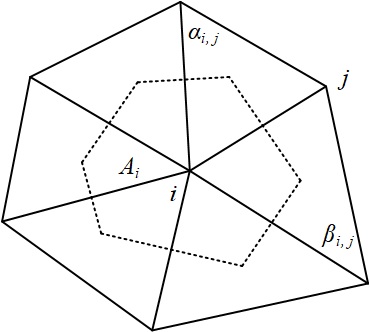 Figure 1: Voronoi region of one vertex. 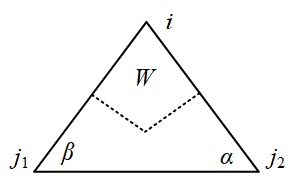 Figure 2: Voronoi region of one triangle of one-ring neighborhood.

As the data structure of mesh is based on half-edge, we can simply find the neighbor of a certain half-edge by retrieving its previous half-edge, e.g., in Figure 2, half-edge $\langle j_2,i\rangle$ is previous to half-edge $\langle i,j_1\rangle$. Thus, by traversing outgoing half-edges associated on a vertex, we can easily calculate the Voronoi region of it using the following code snippet: 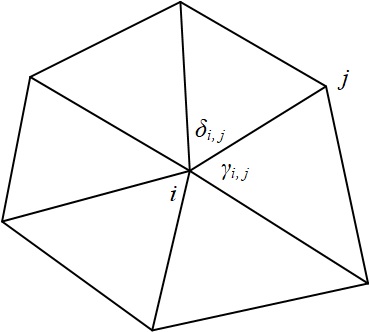 In the real implementation, like what we did in calculating the Voronoi region, we can still take advantage of the sequence of half-edges to find the corresponding corners:

The results of Tutte embedding are shown in Figure 4, applied to different objects with different weight sets.

We can conclude from the results that the Laplace-Beltrami weight set and mean value weight set can better preserve the shape of triangles in the original mesh. This leads to the interior holes of a mesh to enlarge, which is clearly shown in the beetle. For better illustrating this property, we can take a close look at the mesh (Figure 5).

Figure 5: Parts of parameterizations of cow.

I have also uploaded the project to this blog: /projects/tutte-embedding, we can go there to see how the algorithms work.